Ask any Kent Wedding Photographer and they will tell you that the happy couple will love a photo in front of the mighty fortress of Bodium Castle. They probably don’t know much about it, or frankly care at that point but if you need a photographer for that then try http://www.tylermadephotography.com/wedding-photographer-kent/ and I’ll tell you a bit about Bodiam Castle. 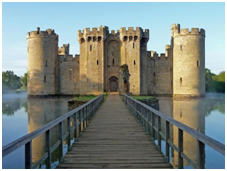 Bodiam was built to stop the French from invading. Its surrounded by a deep moat in the landscape of Kent. It was built by a Knight of Henry the Third. Henry had caused trouble by deciding he’d rather like to be the King of France as well as England as he did have little bit of claim from his Norman Ancestors. They thought the French might be a bit miffed about this, so they thought it might be a good idea to have a cool place to run away to and wait till everything had blown over. By the way the Knights surname was Dalyngrigge which is quite good for a laugh. Not that Id say that in front of him. People were touchy in the medieval period and you could soon find yourself hung up on gibbet for not knowing your place. Anyway, rather than stick a Keep inside as was popular, Dayngrigge (stop sniggering) decided to just build straight up against the main walls. It worked and he saved himself a bit of space. He wasn’t such a daft bloke. Bodiam is not that big but the water plays a clever optical illusion and makes it look weirdly bigger and more imposing. It’s not like swimming lessons were compulsory in French school back then anyway and its also very, very hard to swim in plate and Chain mail.

Come the war of the roses France was forgotten about as one could decide which Plantagenet King, York or Lancaster should be in charge. An attack was planned on Bodiam but never went ahead. Probably because the Lancastrians looked at it and went. “Um nope, lets have a go at Leeds Castle instead”. “Isn’t that up North?” “Nope just over the hill a ways”.

Bodiam was one of those castles blown up a bit by Olver Cromwell after the English Civil war. He did this to a lot of castles because they were all owned by the Gentry and were pretty much all on the side of the King and the last thing Cromwell wanted was a load of easily defended stronghold being used to try and bring the King or his Son back. Bodiam fell into ruin. Still it got that whole romantic ruin look about it and kept artists from the eighteenth and nineteenth century something to draw and paint.

The good old National trsut got it in 1925 and tidied it up so that you could see it is a castle again. It now gets invade by Key stage two chidren and is home to a load of mallards in its moat.