The use of therapeutic and prophylactic radiation energy optical spectrum obtained artificially.

There are infrared (IR), visible (UCI) and ultraviolet (UV) rays.

Absorbed by body tissues, the quantum infrared ray energy is transformed into heat energy. This raises cardiovascular thermoregulatory response, manifested in two phases. First comes a short, slightly pronounced spasm phase, which is then followed by a phase of active hyperemia (active tonic vasodilation), resulting in increased local vascularization of tissues, the amount of circulating in their blood increases. The heat acts as a catalyst, accelerating the biochemical processes in tissues. Under the influence of infrared rays improves metabolism, trophic and livelihoods of tissues, accelerates the oxidation processes.

IR radiation causes skin redness – erythema, heat, which, unlike the UV-erythema occurs during irradiation and disappears in 30-60 min. In addition to the thermal effect of the short-wave infrared rays can give a weak photochemical effect. Under their influence, increases tactile sensitivity of the skin and reduces pain. Analgesic effect of infrared rays associated with changes in receptor sensitivity, removing metabolic products, a decrease in muscle tone. Infrared rays have anti-inflammatory effects in subacute and chronic inflammatory processes. Thus there is an increase in local leukocytosis and phagocytosis, activation of immune-biological processes, absorption and removal of metabolic products, decrease pain, increase in vascular permeability.

For carrying out procedures reflector irradiator set at a distance of 30 to 100 cm (depending on the radiation power) from several places exposure side of the couch on which the patient. The irradiation of the patient should feel a mild heat. Duration of exposure 15-30 min daily sessions conducted, or two times a day for treatment of up to 25 treatments.

Visible rays have a wavelength shorter than infrared rays; they have several more quanta energy. Practically body never exposed to visible radiation alone, because the spectrum of incandescent lamp, which is obtained by using these beams comprises over 85% of infrared rays. Therefore, by irradiating visible rays reactions occur in the body, similar to those that occur upon exposure to infrared rays. Indications and contraindications them coincide. *** UV rays occupy part of the spectrum with a wavelength of 400 to 200 nm.

An important biological significance has bactericidal effect of UV rays, which is due to their influence on the substance of the cell, when UV light activates first, then the oppression of vital activity of bacteria and even their death. Bactericidal action the EUV rays (especially with a wavelength of 254-265 nm). 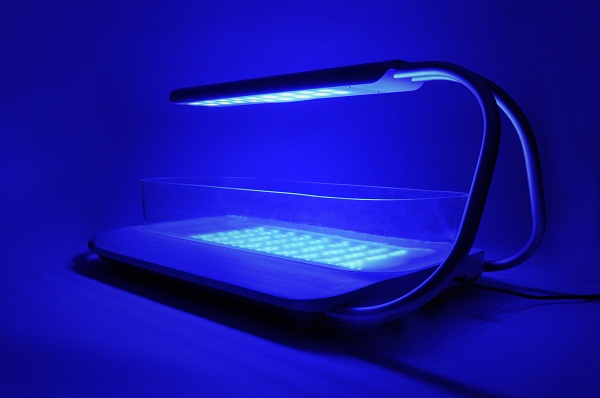 UV rays penetrate into the human body to a depth of 0.1-1 mm and cause the photoelectric effect, the secondary – photo luminescent monogenetic radiation, and photochemical action. They affect all metabolic and physiological responses of cells. The photoreaction biological process involving pigments, polysaccharides, lipids, proteins, nucleic acids. Of particular importance are changes under the influence of UV rays in the nucleoproteins and DNA. Through a series of enzymatic cell system can recognize and eliminate variation in the DNA-protein complex. UV rays contribute to the formation of a special enzyme photo reactivation, which takes place with the participation of reparative synthesis of nucleic acids. Removal of acid damage to cells, particularly DNA, may occur by dark repair. There is also a non-enzymatic type photo reactivation.

Under the influence of UV rays, some substances, without changing the chemical composition, acquire new chemical and biological properties due to an internal rearrangement of atoms in the molecule.

When sufficient intensity and duration of irradiation of the skin after a certain period of time (latency period, which lasts usually from 2 to 8 hours) appears on its UV erythema – aseptic inflammation, Maximum development of erythema with intense irradiation is observed on the 2nd day, when it is necrobiosis and necrosis of epidermal cells. For 3-4-th day of the epidermis thickens by young cells of the basal layer. Erythema gradually disappears and there is peeling due to the withering away of the surface layer of skin cells and replace them with young, there is pigmentation. Skin reaction (erythema degree) depends on the wavelength of the UV rays, the age of patients, localization effects, the functional state of the endocrine glands, the time of year.

The changes occurring as a result of erythema, improve skin trophism, mobilize protective activity inherent in it elements of the reticulo-histiocytic system, UV rays in erythema doses angioblasts stimulate growth, stimulate the formation of connective tissue, accelerates epithelization of tissue.

The most persistent and severe skin pigmentation occurs after repeated exposure to the total of all the rays of the optical spectrum in suberythermal doses. It absorbs heat rays (visible and infrared), protecting the body from overheating.

Some natural dyes (furokumariny, angelicin, bergapten, psoralen, etc…) Cause photosensitivity, which finds practical application in cosmetology and dermatology at the treatment of vitiligo, different forms of psoriasis and other diseases (PUVA therapy).

UV rays can provide and pathological effects arising as a result of overdose or the body’s inability to repair damage caused by UV irradiation. In the latter case, may develop pellagra, lupus erythematisis, xeroderma pigmentosum, cutaneous porphyria and other photodermatosis.

In physical therapy practice using the biological method of dispensing of UV radiation on the Gorbachev-Dalfeldu. The unit dose with the method adopted biodozy – the minimum amount of UV radiation sufficient to cause mild skin (threshold) erythema. Biodozy is expressed in minutes of irradiation.

For topical use often erythematous irradiation dose of UV rays, the intensity of conventionally distinguished: small erythematous dose – 1-2 biodozy, average – 3-4 biodozy, large – 5-8 biodozy gipereritemnye and – above 8 biodozy. One day erythemal doses may be irradiated skin in adults area not exceeding 800 cm2 in children aged up to 3 years – no more than 80 cm 2, from 5 to 7 years – no more than 200 cm 2 and older than 7 years – no more than 300 cm2. Repeated irradiation of the same uchastka conducted after 2-3 days when the decrease of erythema, wherein the dose of UV rays is increased by 25-100%. The same portion is irradiated by 3-4 times.

UV light is used in preventive tselyah- to compensate for natural UV failure, hardening, recovery, increase resistance to infectious and pustular skin diseases, as well as for the treatment of piodermitov, pseudoerysipelas, neurodermatitis, pruritus, acne, alopecia areata, vitiligo and others.

Characteristics of laser radiation: monochromaticity (single-colored) – a constant for each laser, strictly defined wavelength; coherence – strict ordering in time and space radiation (all radiation waves are in phase, same amplitude and period). These properties allow the laser radiation as necessary to obtain a high intensity, directivity exclusive – almost parallel beam of light which can be focused into a point with a diameter corresponding to the wavelength of light emitted by them.

The mechanism of action of the laser on the living tissue, apparently relevant heat, light, pressure, and at higher power, the impact of the electromagnetic field, stroke, photochemical, photo-electric effects, and others; the laser radiation of high power has a devastating effect on the cloth, low power – stimulates reparative regeneration of the skin, mucous membranes, bones and nerves when they are damaged, accelerates the healing of wounds, burn surfaces, trophic ulcers.

About 50% of the laser energy is absorbed by the skin. Under the influence of laser light activates the skin receptors.

When exposed to laser radiation of low intensity increased activity of metabolic processes, cholinesterase and transaminase and permeability of skin vessels, increases the concentration of RNA and glycogen.

The treatment is carried out in the form of direct irradiation of the lesion or the effects on the reflex zones, including biologically active skin points used in acupuncture. Sessions lasting from 20 seconds to 5 minutes on the field (a total of up to 20 minutes) is carried out every day or every other day, 10-20 procedures per treatment course.

Contraindications: myocardial infarction, stroke (acute phase), circulatory failure – IB III degree, pulmonary tuberculosis in an active form, bleeding and susceptibility to them, the localization of the pathological focus on the eyelids.

With depression and connected: What we do on the Internet when we see everything black
How does the money in the relationship?