A look inside the commercial kitchen that never sleeps

Although all restaurant owners and caterers can feel frazzled after a busy day, there are some catering operations that make others pale into insignificance. 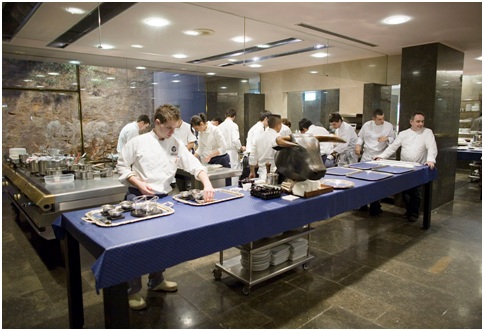 The world’s largest catering operation, Emirates Flight Catering in Dubai, takes up 56,000 square feet and produces more than 40 million meals every year. One of the most interesting and important areas to consider for such as large kitchen is the appliances and white goods that are needed to operate such a huge catering facility.

This kitchen is in such high demand that it is currently building a 55,000-square-foot extension to the building to cope with the increasing number of diners. The operation is owned by Emirates Group and Dubai Civil Aviation and is located next to Dubai international airport.

The journey of the crockery begins on the monorail, which takes the items to the areas in which they are needed on an impressive ceiling system. This monorail travels around the building on a 2.5km trail, delivering items at a fast speed to ensure smooth operation. The food is meanwhile x-rayed and sent to the kitchens to begin preparation.

At the other end of the operation, the dirty plates, crockery and leftover food is brought into the building to be dealt with. Crockery and plates are sent to the huge commercial warewashers, which can deal with three million items of crockery per day. These warewashers, which are available from suppliers such as https://www.247cateringsupplies.co.uk/bar-supplies/commercial-warewashers, are ideal for large cleaning loads and make washing tableware quick and easy.

Many attempts have been made to create more efficient dishwashing technology, with robots put forward as the next big thing in cleaning technology. There has even been a robot called Boris designed to manipulate objects, which could be used to load up a dishwasher.

The importance of feedback

It is not only the cleaning and the food preparation that is taken seriously at Emirates Flight Catering. If passengers do not like the meals, they are taken out of service straight away and replaced. Feedback is essential for a good service and any negative feedback is acted upon by the catering manager immediately. The operation is planned to the smallest detail and in total around 100 people are involved in the preparation of each meal tray.