The solo and riff from Whole Lotta Love, the brilliant bombastic pomposity of Kashmir, the old fashioned blues rock of Rock n Roll, the mandolin on Battle of Evermore, the gentle melodies of That’s the way. I may have lost a lot of people but others will be now jumping up and down with excitement and shouting the name of one man Jimmy Page. Page is the founding member of Led Zeppelin, easily one of the greatest bands this country has ever produced and has had a stunning musical career influencing many different artists and becoming an Icon for rock. He’s sees himself as more of an experimental Blues player but there are others who would see him as the founding father of Metal and the power riff. Go into any Gloucestershire Guitar shops and you will see the great man’s work on the walls and in the book shelves. Take a look at  http://www.guitarsmiths.co.uk/  where you can see his work and many others . 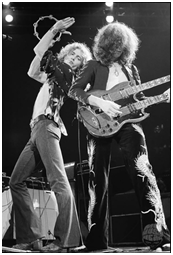 Page began as a session musician. A job that he loved as it gave him a regular income. He was concerned as to what effects touring would have on his body and mind which is strange when you consider the excess that Led Zeppelin are supposed to have got up to. When he was told to play Muzak he decided that enough was enough and it was time to join a band, he’d had many offers, and go out on the road. He was pressed into the joining the Yardbirds as a replacement for Eric Clapton. He was reluctant at first and put forward his friend Jeff Beck instead. It was after a gig when the Yardbirds guitarist left that Page took the plunge and decided to join them. The Yardbirds never got off the ground because of internal wrangling’s and Jeff Becks decision to leave along with other members. This found Page with a decision. Before he could move on he needed to complete some touring commitments but he needed some musicians for it. He recruited John Paul Jones on Bass, John Bonham on Drums and Robert Plant as the vocalist. The New Yardbirds were born! This punchy title was change by their manager Peter Grant to Led Zeppelin. 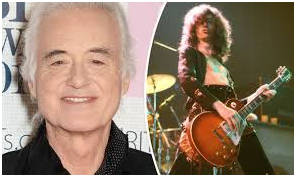 They went on to be one of the biggest recording artists of all time. They did this by even shunning the pop charts never releasing a single and purely putting out albums. Page controlled the output using the techniques he had learned as a session player and with the Yardbirds to explore where Rock could go as a sound. Page, like Hendrix, was not a one for labels. His dream and aim was to create a sound that married together the blues, rock and heavy rock but with a nod to the classical acoustic sound. Or as he put it “Lots of light and shade”.

6 incredible albums were to come and legendary tours which, as is written elsewhere, were exploits on hedonism never seen before. A great guitarist. A great band.